Listen to the mysterious music of the K2-187 exoplanets

K2-187 is one of the rare extrasolar systems in which all known planets find themselves close to an orbital resonance. When their motion is represented as sound we find them to be playing the same uneasy harmony used in Alfred Hitchcock’s Vertigo. We begin by converting the star’s raw light curve into musical notes based on this harmony, with brighter measurements heard as higher notes. The star’s brightness fluctuates but dips down as a planet passes in front (this is how these planets were discovered in November 2018). Then, we overlap all of the dips caused by each planet to make them easier to see and hear. Finally, you will hear the rhythms and harmony of the orbits themselves. The planets spiral inwards towards the end which may have been how they ended up so close to their star. In fact, the inner planet is an Ultra Short Period planet which orbits its star every 18 hours. This is fast enough too make you dizzy but that’s expected in the Vertigo solar system.

Continue reading to find out about how each segment works, and listen to the entire 9 minutes of the raw light curve data! 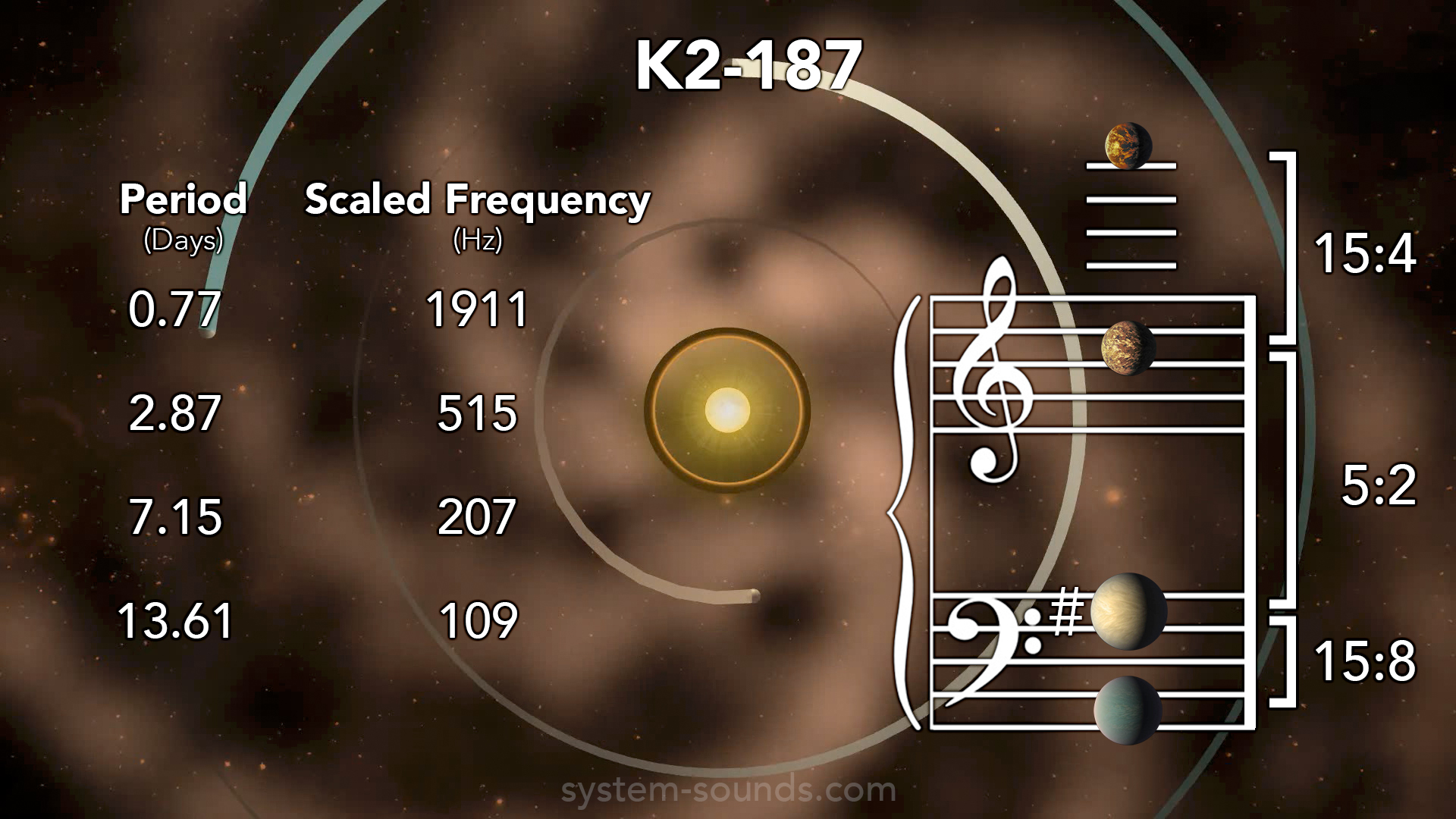 The orbits of K2-187‘s 4 planets are converted into musical notes by bringing their orbital frequencies into the human hearing range. Each planet’s note is played once per orbit as it passes front of its star when viewed from Earth (a ‘transit’). This system’s suspenseful sound is a result of many near-resonances that conspire to produce the same harmony used in the theme music of Hitchcock’s Vertigo. It serves as the soundtrack for the dizzying orbits of these 4 tightly-packed planets which take between 18 hours and 13 days to orbit their Sun-like star. In fact, the short year of inner planet presents its own mystery as it has somehow ended up much closer to its star than where it must have formed. As one of the rare cases where such an ‘Ultra-Short Period’ planet is accompanied by many close neighbours, this system my provide the clue that finally solves this puzzle.

To arrive at musical notes the actual orbital frequencies have been increased by about 130 million times (or about 27 octaves). The planets in this system find themselves close to orbital resonances so that their orbital periods form whole number ratios with each other (15:8, 5:2, and 15:4). These ratios are a bit more complex than those found in TRAPPIST-1, giving K2-187 a more tense and unsteady harmony. Together, the 4 planets are playing an AmMaj9 chord, pretty advanced stuff!

The 4 planets of K2-187 were discovered by looking for slight dips in the brightness as each one passes in front of their star (the ‘transit’ method). This data was collected by the Kepler Telescope’s K2 mission and we have converted every measurement into a musical note by assigning the dimmer measurements to lower notes. We used the harmonic minor scale to match the actual harmony that these planets produce when their motion is converted into musical pitches (see above). On the left you can hear the brightness decrease as each planet transits the star. In this case, every recorded transit for a given planet is overlaid creating many interesting melodic and rhythmic patterns. On the right you can hear the entire light curve which was recorded over 75 days with a measurement every 30 minutes. Although many transits can be easily seen and heard, some are hidden by the star’s own natural variability making planet detection a tough task, especially for the smaller planets (the innermost planet is only 1.3 times larger than Earth while the outer two planets are closer in size to Neptune).