The sound of stars in love

Stars can fall in love too! Some pairs of stars that orbit each other (called binary stars) have very eccentric, oval-shaped orbits. They spend most of their time far apart and then swing in close, almost kissing, before flying back out. When they’re near their closest point, the tidal force of one star will deform the other into an egg-like shape, the same way the Moon’s tidal force creates ocean bulges on Earth. This change in shape can make the stars appear suddenly brighter or dimmer depending on the angle we see them at. The plot of their brightness variations over time resembles an electrocardiogram, hence the name Heartbeat stars. Speeding up this signal many times and converting it to audio allows us to hear the heartbeats of these stellar companions.

The best part is that in some cases, the interaction of stars while they’re at their closest excites one or both stars, making them pulsate in time with the heartbeat. They keep pulsating during their entire orbit, like they’re keeping their partner’s memory alive until they meet again. These pulsations happen with a much higher frequency than the orbits themselves so you can hear them as higher pitched tones when their light is converted to sound.

Over 170 heartbeat stars have been discovered and of these, only a few dozen show these stellar pulsations which are called tidally induced oscillations. To bring the rhythm of the heartbeats into the range of human heart beats we have sped up the signal by about 2 million times. The make the sounds fall well within the human hearing range we have increased their true ‘pitch’ by 23 octaves. The graphs in the video show each star’s brightness fluctuations over time, the physical separation of the two stars, and a frequency spectrum of the signal. The frequency spectrum has contributions from the many low frequencies present in the heartbeat itself and sometimes they show one or more high frequencies due to stellar pulsations.

Binary stars are already extremely important for helping us learn about the properties of stars and Heartbeat stars can also help us understand how tides affect stars and their pulsations. There’s a mystery here too. Very elliptical orbits tend to relax into near circular orbits over time but many of these Heartbeat stars are billions of years old so they shouldn’t exist. The solution may be that each system actually contains a third undetected star and interactions with this third star are what keeps the heart beating. We’ll have to wait for more observations to find out. 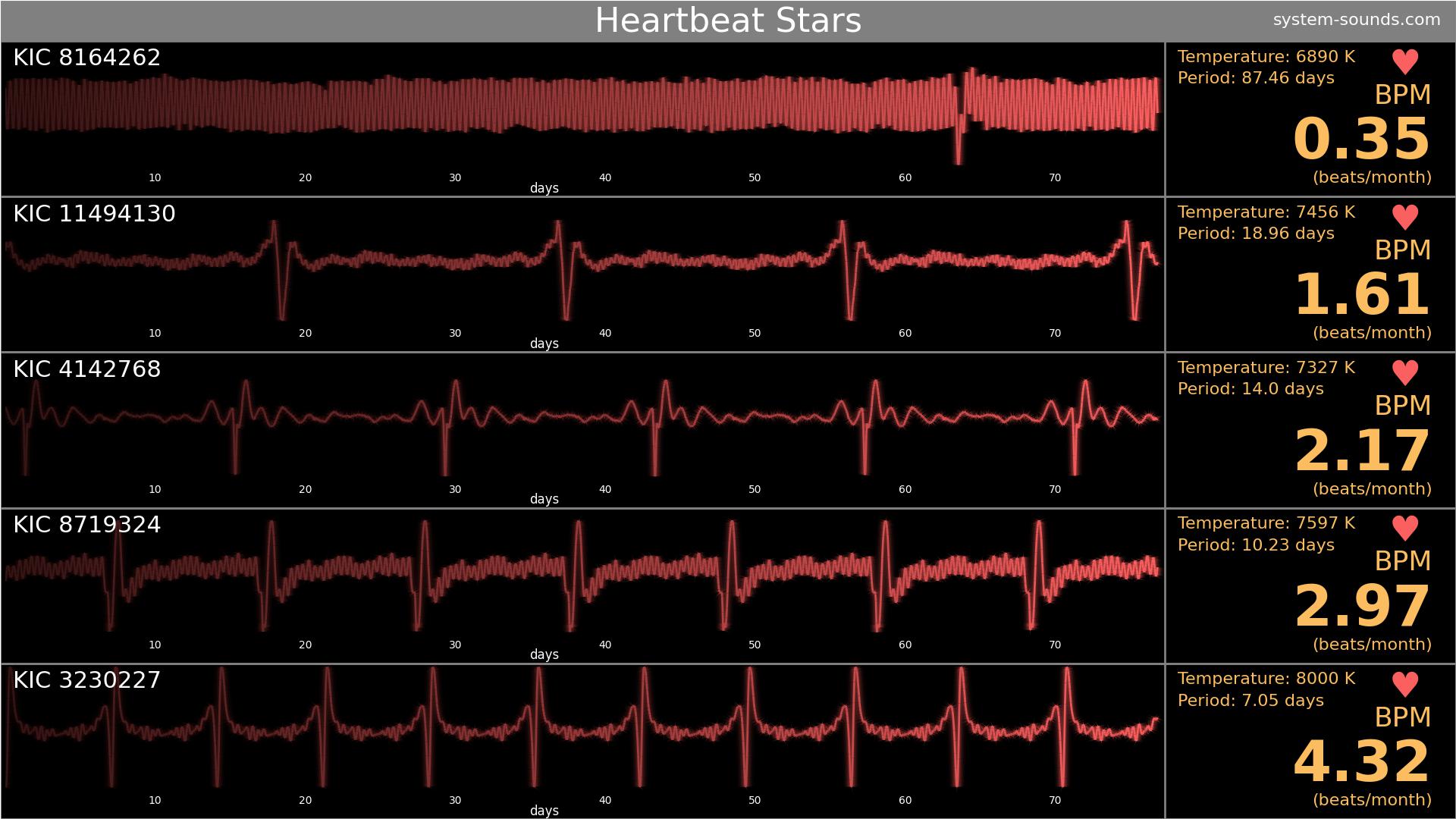 The light curves of 5 heartbeat stars that pulsate in between close encounters with their companion star.