Images From The Hubble Space Telescope Converted Into Sound

Our eyes have been stunned by the gorgeous views of the deep universe captured by the Hubble Space Telescope. What happens if we convert them to sound? We worked with NASA to find out.

We did this in two different ways. For images of galaxy clusters we scan the images from left to right while generating sound waves based on the brightness and position of the light received by Hubble. Brighter light is heard as louder sound and the tone’s frequency increases from the bottom up to the top of the image. Objects near the top of the image then produce the higher pitched tones. This is very similar to how a music box works except that each galaxy’s shape as well as its position controls the sound you hear. Is this the sound of SpongeBob in the future?

For images of planetary nebulae (which have nothing to do with planets!) we scan the images and convert their vibrant colours into sound. Red light is mapped to lower pitches and blue light is mapped to higher pitches. This is a natural mapping since the frequencies of light increase from red to blue in the same way that frequencies of sound increase from low to high pitches.

The first image is of a galaxy cluster known as RXC J0142.9+4438. You can see (and hear) the many galaxies orbiting each other like a swarm of bees, centered around a massive elliptical galaxy. Smaller or more compact galaxies produce short blip sounds while some elongated spiral galaxies create longer notes that can change pitch. The cluster’s enormous mass distorts spacetime and acts like a giant magnifying lens. This gravitational lensing giving us a closer (although distorted) view of galaxies that lie far beyond the cluster. A few foreground stars that are within the Milky Way galaxy can also be found in the image (the small bright objects with cross-shaped light). 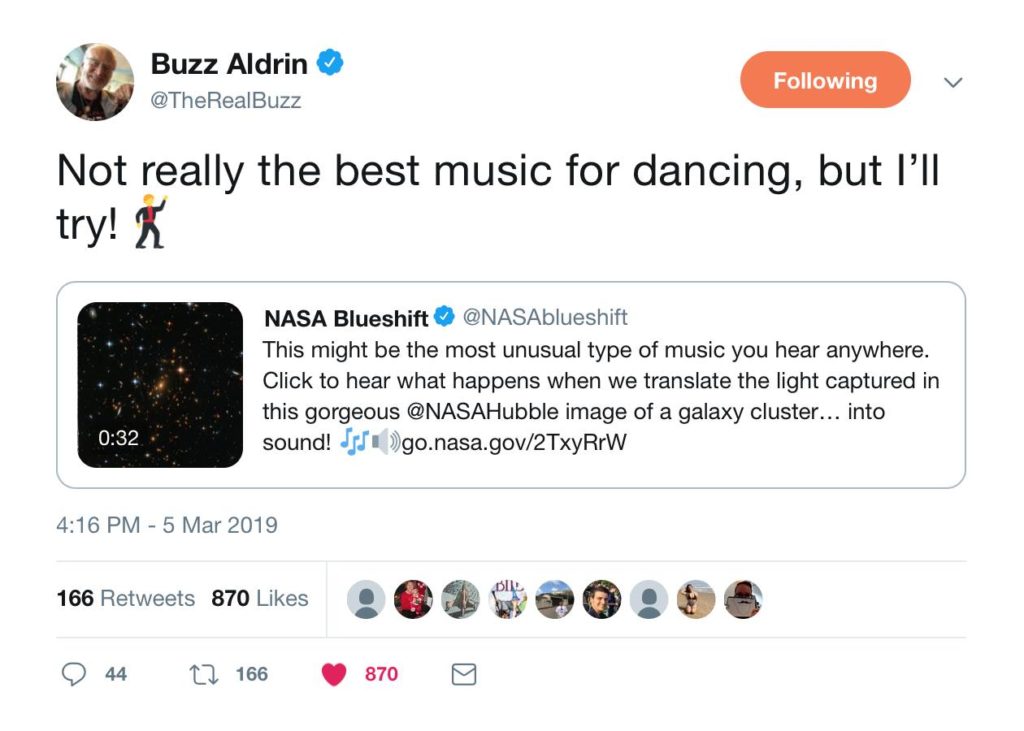 Our galactic sonification was heard by some pretty famous people (we’ll need to add beat next time) and became a meme!

The second image is of the Abell 370 cluster. Listen for the two massive elliptical galaxies near the cluster’s core and the bright foreground star at the bottom right. Some dramatic gravitational lensing also occurs in this cluster, creating arcs such as ‘The Dragon’ just below the large elliptical galaxy on the bottom left.

To convert an image of the Helix Nebula into sound we mapped colour to pitch (red=low, blue=high) and brightness controls volume. Red indicates the presence of hydrogen and nitrogen and blue indicates oxygen. Nebulae like this are formed when a low mass star sheds some of its outer material near the end of its life (red giant stage). The Helix Nebula, or Eye of Sauron, is 655 light years away and 3 light years across. It appears half the size of the full moon (huge!) and Hubble images were combined with wide field images from NOAO’s Mosaic Camera to make this image.

We used the same code to convert Hubble’s 30th anniversary image of the Cosmic Reef into sound. The red nebula (hydrogen & nitrogen) is a stellar nursery while the blue one (oxygen) is created by material ejected from an extremely bright, massive star.

We were also asked to sonify the iconic Hubble Ultra Deep Field image. We imagined flying into the image, reaching galaxy’s whose light was emitted up to 13 billion years ago. The musical pitch indicates the overall colour of the galaxy with redder light being lower notes and bluer light being higher notes.  You can hear the steep drop in pitch towards the end since the farthest galaxies in the image are extremely redshifted due to the expansion of the universe.