Listen to the changing harmony of Pythagoras’ favourite solar system

K2-138 is one of the most musical solar systems ever found. Its inner 5 planets were discovered by citizen scientists in January of 2018 and an outer 6th planet was announced in January of 2019. The 6 planets form an unbroken chain of near-resonances which means that their motion can be converted into musical rhythms and harmony. This is done by speeding them up and bringing their orbital frequencies into the human hearing range. This system was initially tuned while the planets migrated slowly through their birth disk. Since the disk disappeared, their orbits have been changing slightly and they are now in desperate need of a tune up!

The inner 5 planets all find themselves close to 3:2 resonances (for every 2 orbits of one planet, the next one inwards orbits 3 times). Due to this simple pattern, each pair plays the interval of a perfect 5th (the first two notes of ‘Twinkle, Twinkle, little star’). In a nod to the father of the ‘Music of the Spheres’, these 5 planets follow the tuning system designed by Pythagoras himself in which all notes are related by a perfect 5th.

Today, the outer planet is tuned between a perfect 5th and a perfect 6th plus an octave below its neighbour, (or between a 3:1 and a 10:3 resonance). Although it much closer to a perfect 6th, it’s unclear what its initial tuning may have been, especially if there are other undetected planets. To complete Pythagoras’ dream, we start it off on a 3:1 resonance and listen as it descends towards the nightmare of the present tuning 😉 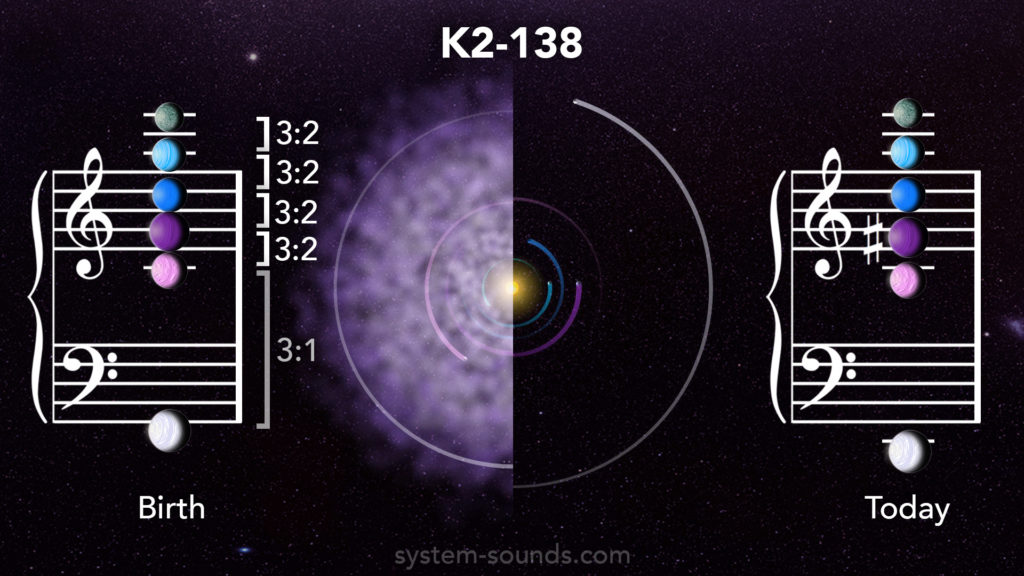 The initial and current tuning of the k2-138 planets. The inner 5 planets are very close to 3:2 resonances and the 6th has been set to a 3:1 resonance as a possible initial state.