Where there are resonances there is music and no other place in the solar system is more packed with resonances than Saturn. Its magnificent rings act like a sounding board that launches waves at locations that harmonize with the planet’s many moons, while some pairs of moons are themselves locked in resonances.

In 2017 the Cassini spacecraft began its Grande Finale in which it flew closer to the rings than ever before and sent us back otherworldly images of resonances at work. Its mission ended on September 15 when it plunged in to Saturn and to celebrate its remarkable run we have translated the motion of Saturn’s moons and rings into music and sound.

In part 1 we use a numerical simulation of the moon system to play a note for each orbit and assign pitches by increasing their actual orbital frequencies by 27 octaves so that they can be heard by human ears. We apply the same pitch scaling to the entire ring system and modulate the volume of the resulting tone using the observed brightness of the rings. The final sound was created by combining the oscillation frequencies of Saturn itself.

We increased the orbital frequency of Saturn’s major moons by 27 octaves and played the resulting notes on a Rhodes electric piano, once every orbit. This is equivalent to speeding up their motion by about 13 million times and it allows us to hear the natural harmony of the system. The moons enter one by one from the inside-out: Mimas, Enceledus, Tethys, Dione, Rhea, and Titan. Although Iapetus is often also considered a major moon, it orbits much farther away from Saturn the others and therefore travels much slower. Using our pitch scaling, Iapetus’ note would be slightly below the human hearing range, although it doesn’t complete a full orbit anyway in the simulated time!

The orbital periods, scaled frequencies, and musical notes of Saturn’s major moons. The frequencies have been increased by 27 octaves from their true values so they can be heard by human ears. (Credit: SYSTEM Sounds/NASA/JPL-Caltech/Elisabetta Bonora/Marco Faccin)

There are two orbital resonances in this system which give rhythmic and harmonic structure to the otherwise unsteady lullaby-style melody. Mimas and Tethys are locked in a 2:1 resonance so that Mimas orbits twice for every orbit of Tethys. The same relationship links the orbits of Enceledus and Dione. The combination of these four moons produces a superposition of two simple rhythms which creates interesting patterns as they fall in and out of synchronicity. Also, since doubling the frequency of a note produces the same note but an octave higher, the four inner moons produce only two different notes, close to a perfect 5th apart. The addition of Rhea establishes a temporary major harmony until it is disturbed by the ominous entrance of Saturn’s largest moon Titan.

Saturn’s rings can sing! Since the rings are composed of trillions of icy particles all in orbit around the giant planet we can apply the same pitch scaling that we used for the moons to the entire ring system. We start from the outer edge and scan through the rings inwards with the pitch being determined by the orbital frequency of the ring particles. The resulting notes of the outer edge (the F ring) and the inner edge (of the C ring) are approximately a D# and a G#, one and a half octaves higher. We assigned these notes to a combination of organs and strings, inspired by the instrumentation of the main theme of the movie Interstellar. Since this provides a nearly continuous sweep of musical pitches there will be many places within the rings where the tones of the moons resonate, causing disturbances in the rings. In this way the rings are similar to a radio receiver that is tuned to every frequency at the same time. The harmony of the resonances with Saturn’s small moon Janus are explored in Part II.

As we scan through the rings, the volume of the tone is modulated using the observed brightness of the rings. Experts will have noticed that we used an image of the un-illuminated side of the rings to generate this curve. We applied the same processing to an image of the illuminated side (see below), but as you might expect, the dark side is much more interesting. You can hear and see several interesting features in the rings system such as gaps, ringlets, flat spots, plateaus, ramps, and density waves. Some of these have been labeled in the figure but there are many more. The piano chord after the scan was inspired by the final chord of The Beatles’ A Day In The Life, which also follows a tense, crescendo with steadily increasing pitch. 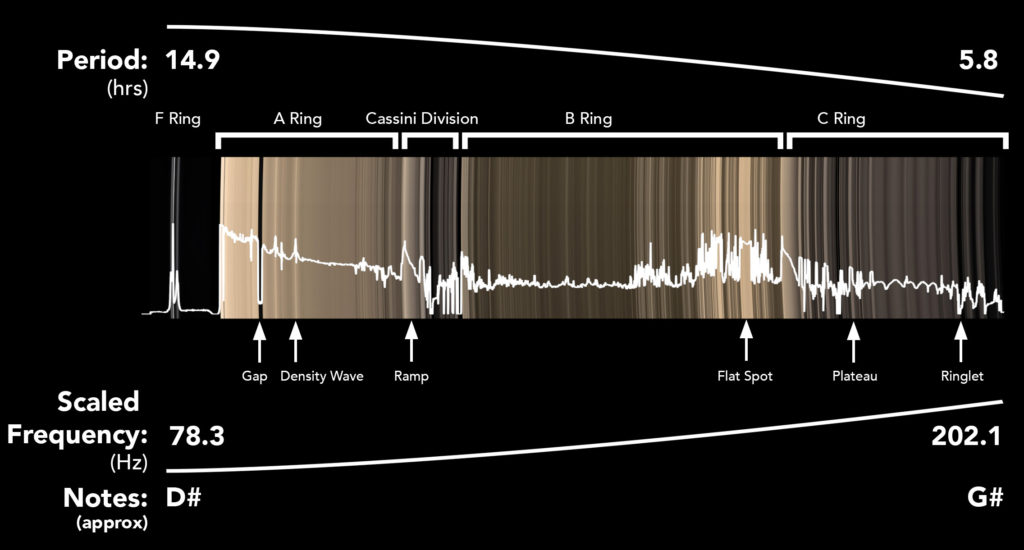 The local orbital periods, scaled frequencies, and musical notes of Saturn’s main ring system. The brightness profile of the un-illuminated side of the rings was used to modulate the volume of the constantly changing note. Some of the many interesting features which can be heard in the sonification are highlighted. (Credit: SYSTEM Sounds/NASA/JPL/Space Science Institute)

Click the videos below to compare sonifications of the bright and dark side of Saturn’s rings. We warned you, the dark side is always more interesting.

The complex structure of Saturn’s ring system can be felt as well as heard. We have created a 27-inch long wood carving of the dark side of Saturn’s rings so people can slide their finger along the grooves while listening to their audio form. It’s complete with braille labels and will premiered as part of a tactile-audio astronomy booth at the Canadian National Institute for the Blind’s Night Steps fundraising walk on September 15, 2017 (the same day the Cassini spacecraft ends its mission!). The wood carving is supported by the Dunlap Institute for Astronomy and Astrophysics and was crafted by James Sommerville Edgar.

A wood carving of Saturn’s main ring system designed for the visually impaired and crafted by James Sommerville Edgar. They will be able to feel many complex structures within the rings while also listening to their audio form. (Credit: SYSTEM Sounds/Dunlap Institute for Astronomy and Astrophysics)

Just like every other planet, Saturn itself rings like a bell and these oscillations can also be sped up and perceived as sound. To date, 4 different types of `normal modes’ have been discovered, each with their own frequency. Each mode is labelled by a number which describes its geometry, so that mode 2 completes 2 cycles as it wraps around the planet.  The discovered modes are 2, 3, 4, and 10 and these produce the descending notes B, Bb, A, and F#. In fact, modes 2 and 3 are actually composed of three nearly-equal frequencies and the combination of these slightly out of tune notes produces a distinctive beating pattern. The low rumbling sound heard at the beginning and end of SATURN Sounds is the combination of all of these frequencies, 21 octaves above their true pitch.

There is another type of oscillation within Saturn known as a `tesseral mode’. These are more permanent distortions in the shape of a rotating object (that is, the planet isn’t exactly round when viewed from above one of its poles). The mode 3 pattern of this type is currently the best measured and this turns out to be composed of five separate frequencies, which cluster around an A note (an octave below the normal mode 4). The combination of these frequencies creates a rich beating pattern which can be heard towards the end of SATURN Sounds, raised 23 octaves above its true pitch.

These oscillations of Saturn lead to oscillations in Saturn’s gravitational field which creates faint wave patterns within the ring system. It is by studying these subtle distortions that astronomers are able to detect the internal modes of Saturn and learn about its otherwise hidden internal structure.

We’d like to thank astrophysicists Matthew Hedman and Matthew Tiscareno (SETI Institute) for their excellent contributions to this project.

Cooper, this is no time for caution.