Where there are resonances there is music and no other place in the solar system is more packed with resonances than Saturn. Its magnificent rings act like a sounding board that launches waves at locations that harmonize with the planet’s many moons, while some pairs of moons are themselves locked in resonances.

The Cassini spacecraft is currently flying closer to the rings than ever before and sending us back otherworldly images of resonances at work. It will end its mission by plunging into Saturn in September and to celebrate its remarkable run we have translated the motion of Saturn’s moons and rings into music and sound.

In part 2, Saturn’s moon Janus plays a musical scale within the planet’s rich ring system by gravitationally exciting spiral density waves within the rings. We increase the orbital frequencies of the moons and resonances by 23 octaves so that their notes can be heard by human ears. A guitar is played for every orbit of Janus and of its co-orbital moon Epimetheus while a cello sustains a note for each resonance within the rings. We then zoom in and fly through one of the dramatic spiral density waves recently photographed by the Cassini spacecraft. The observed brightness variations of the wave are used to modulate the volume of the cello, as well as a ghostly sonification of the pattern’s frequency spectrum.

Janus and Epimetheus are two small irregular moons of Saturn that share an orbit just outside the main ring system. This is an example of a 1:1 resonance, the only one of its kind in the solar system. The two moons orbit at slightly different distances from Saturn, although the difference is smaller than the size of either moon. Due to this difference, the inner moon slowly catches up to the outer one and every four years they swap places, with the outer one moving in and the inner one moving out. We scaled up the orbital frequencies of the moons by 23 octaves and played the resulting note (a C#) on a guitar once for every orbit.  The dancing moons now have a soundtrack. We simulated the final few months of the Cassini spacecraft’s mission, which comes to an end on September 15, 2017. At this time, Janus is inching closer to Epimetheus and will steal its place in 2018. Together, the two moons play a unison drone but with a constantly shifting rhythm that repeats every 8 years.

Janus and Epimetheus in their shared orbit just outside of Saturn’s F ring. This was taken in 2005, shortly before Epimetheus caught up to Janus and they swapped orbits. (Credit: NASA/JPL/Space Science Institute) 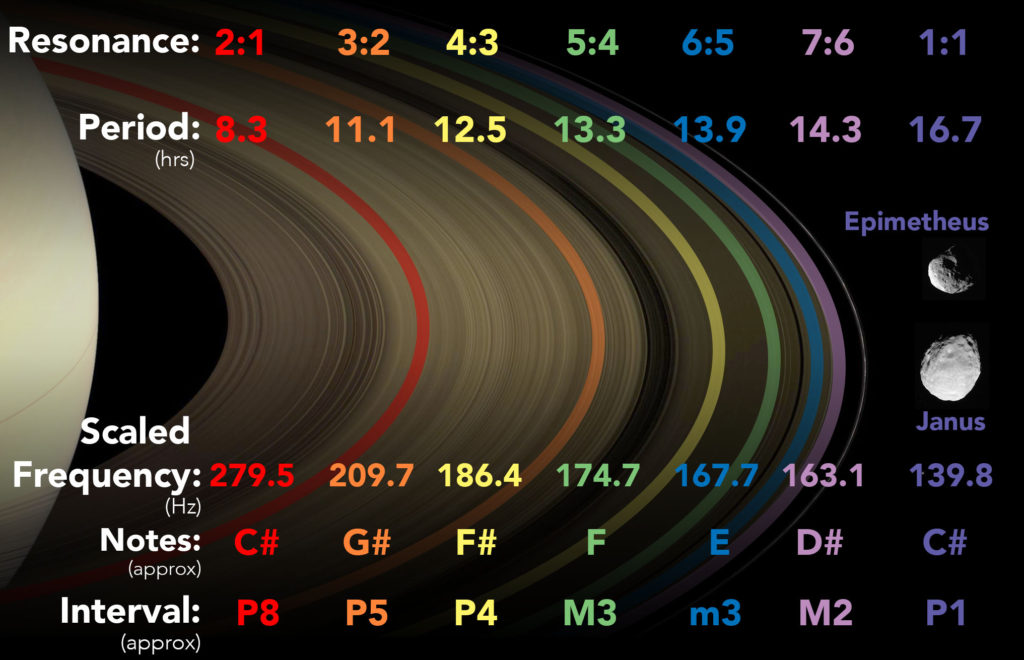 The orbital periods of the six 1st order resonances of Janus that effect the ring system. The 1:1 resonance is Janus’ co-orbital moon Epimetheus. The corresponding frequencies of these resonances were scaled up by 23 octaves, producing a musical scale. (Credit: SYSTEM Sounds/NASA/JPL/Space Science Institute)

Some of the most interesting and beautiful features in the rings are caused by first order resonances with Janus. The simplest example is the 2:1 resonance where for every orbit of Janus, the ring particles here complete two orbits. There are six such locations within the ring system, although the 7:6 resonance is actually responsible for maintaining the sharp outer edge of the A ring. The 2:1, 4:3, 5:4, and 6:5 resonances each launch clear spiral density waves while the pattern caused by the 3:2 resonance is hidden within more complex, and unexplained structure. Using the same pitch scaling as with Janus and Epimetheus, we play a sustained note on a cello for each of these resonant locations. Together, they create a mysterious scale that morphs from dark and dissonant to bright and pure.

The waveforms of the resonances of Janus after being scaled up by 23 octaves. For example, the wave of the 2:1 resonance completes two full cycles for each cycle of Janus’ wave. (Credit: SYSTEM Sounds)

The 2:1 spiral density wave is longest and most dramatic wave in the entire ring system. The repeated tugs from Janus launch a pattern of crests that sweep outwards at roughly 1.4 meters per hour while getting distorted in interesting ways. After zooming in to this region we fly through the wave pattern and let the volume of the sustained cello follow the brightness of the wave. Since we are flying outwards, towards where the ring particle orbit slower, the pitch of this note drifts flat, from a C# down to a sharp B. We combine this sound with a sonification of the frequency spectrum of the wave. This is the sound you would hear if you could fly through this wave pattern at about 22 km/s, the same speed as is shown in the video. We increased the frequency by 6, 7, and 8 octaves and combined the result. This lets you hear the frequency ‘chirp’ upwards as you fly through regions where the wave crests get closer together. The haunting tones of the density waves will be explored further in a future video. 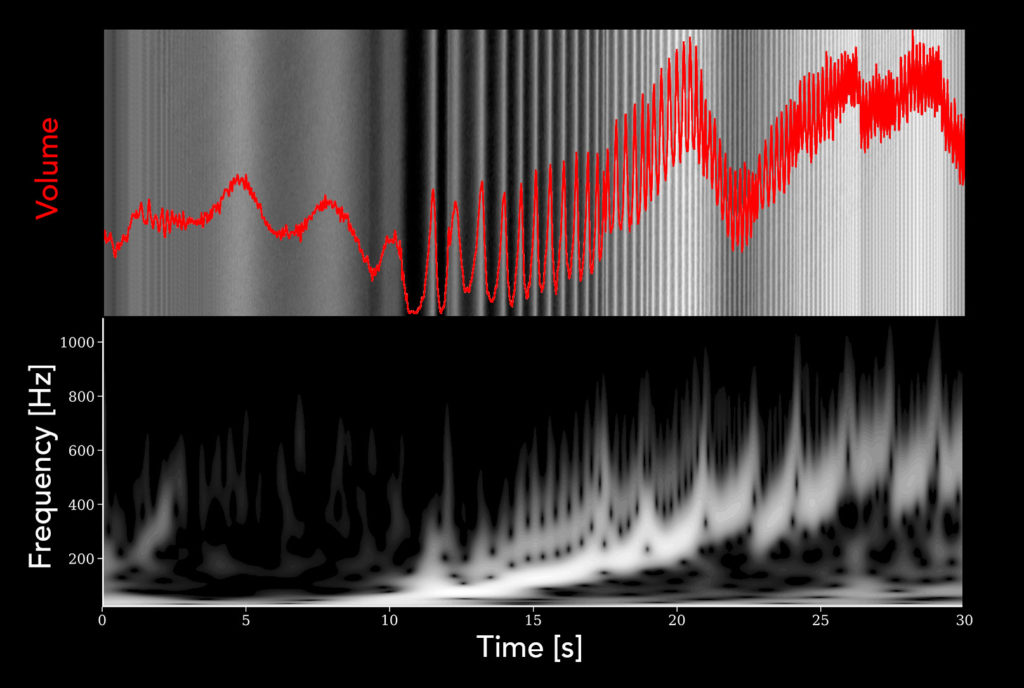 Top panel: The brightness profile of the spiral density wave launched at the 2:1 resonance with Janus. This was used to modulate the volume of a sustained cello. Bottom panel: The spatial frequency spectrum along the wave. Its volume was also modulated with the brightness profile. (Credit: SYSTEM SOUNDS/NASA/JPL/Space Science Institute)

Another interesting feature is caused by the orbit–swapping of Janus and Epimetheus. The waves are primarily caused by Janus since it about four times as massive as Epimetheus. When Janus’ orbit shifts every four years, the location of the 2:1 resonance also shifts, reseting the launching point of the waves. The historical record of this ‘stutter step’ can be seen and heard as a double peak at several points within the wave. Click below to hear the isolated frequency spectrum. It has been doubled an octave above and an octave below to accentuate its motion.

Watch the video below to hear a sonification of all the density waves caused by 1st order resonances of Janus. Density waves due to resonances with other moons as well as wakes of Saturn’s ‘ravioli’ moon Pan are also present.

We’d like to thank astrophysicists Matthew Hedman and Matthew Tiscareno (SETI Institute) for their excellent contributions to this project.

About Us
Madness, as you know, is like gravity, all it takes is a little push.